What do you say to a customer that wants off white but under no circumstances can it be cream? Kev’s answer, inject a little grey.

On a recent quote (to which Kev went on his own for a change), the customer insisted that they wanted an off white colour that wasn’t cream as she thought this would look like a dirty white. She wanted a major changed as the units did look tobacco stained even though she was not a smoker, this was the original style of the kitchen. I want to say it’s supposed to look antique but I think that may be pushing it. Believe me, the photo does not give it justice. 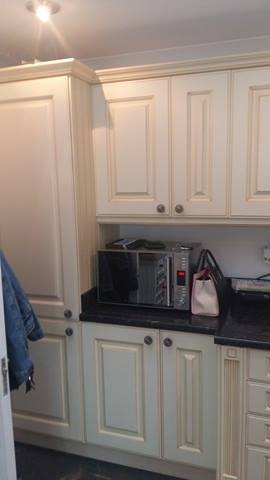 After a very in depth discussion about what colour the customer wanted, they come up with the idea of a very light grey. To get this affect, Kev bought white and grey cupboard paint and used a Calpol syringe to put a little bit of the grey into the white. He obviously used his magic undercoat before hand (sorry, I’m not allowed to divulge what this is as it’s a secret that has been passed down through his family – only joking, it’s a bit of a trade secret that he doesn’t want to share or he will be out of work because everyone will be doing it!).

After undercoating everything, he then went on to put his home made version of off white/grey onto the kitchen units. After he had finished 3 he left it to dry and returned the following day.

I have to admit, I do kind of like this colour and when Kev asked me for a name for it, I came up with K Grey (K being for Kev, obviously!) When he got to the customers house, they had decided that it wasn’t quite dark enough so he then had to start again with the mixing of colours.

The end product ended up being grey as far as I’m concerned. And hopefully you will all agree with me! 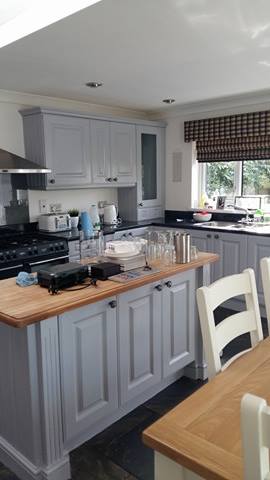 When he had finished, Kev sent me a photo while I was in work to see if my team could come up with a name (he didn’t really like K Grey but I didn’t take offence, honestly). Can you guess what colour they come up with? Yup, you’ve guessed it, GREY!!!

I’ve now called it ‘A lighter shade of Grey’ whether Kev likes it on not.

It’s quickly becoming a bug bear of mine that customers haven’t got the forethought to think about what colour they want their kitchen to be before the decorator gets there. It’s not as if they spend any time in room, oh hang on a minute, isn’t that were you cook?

One thought on “When is off white not off white? When it’s grey!”